Asphyxia of a newborn

- pathology of the early neonatal period, caused by respiratory disorders and the development of hypoxia in the born child. 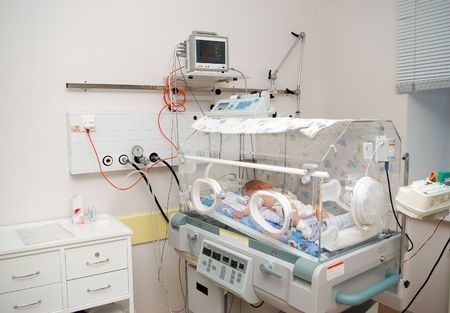 Asphyxia of a newborn is clinically manifested by the absence of independent breathing of the child in the first minute after birth or by the presence of separate, superficial or convulsive irregular respiratory movements with preserved cardiac activity. Newborns with asphyxia need resuscitation. The prognosis for asphyxia of a newborn depends on the severity of the pathology, the timeliness and completeness of medical measures.

Of the total number of newborns, asphyxia is diagnosed in 4-6% of children. The severity of asphyxia is due to the degree of gas exchange disorders: the accumulation of carbon dioxide and lack of oxygen in the tissues and blood of the newborn. According to the time of development, asphyxia of newborns is primary (intrauterine) and secondary ( extrauterine), which occurred in the first day after birth. Asphyxia of newborns is a dangerous condition and is one of the frequent prerequisites for stillbirth or neonatal mortality.

The causes of Asphyxia of the newborn

Asphyxia of newborns is a syndrome that develops due to a violation of the course of pregnancy, diseases of the mother and fetus.

Primary asphyxia of the newborn is usually associated with chronic or acute fetal insufficiency of oxygen, due to intracranial injury, intrauterine infections (rubella, cytomegalovirus, syphilis, toxoplasmosis, chlamydia, herpes, etc.), immunologic incompatibility of blood mother and the fetus, malformations of the fetus, a partial or full obstruction of the airway of the newborn amniotic fluid or mucus (aspiration asphyxia).

The development of asphyxia of a newborn is facilitated by the presence of extragenital pathology in a pregnant woman (anemia, heart defects, lung diseases, thyrotoxicosis, diabetes, infections), as well as a burdened obstetric history (late toxicosis, premature placental abruption, pregnancy postponement, complicated childbirth), and bad habits in the mother.

The causes of secondary asphyxia of the newborn, as a rule, are violations of the child's cerebral circulation or pneumopathy. Pneumopathies are perinatal non-infectious lung diseases caused by incomplete expansion of the lung tissue; they are manifested by atelectases, edematous-hemorrhagic syndrome, hyaline membrane disease.

Pathogenesis of Asphyxia of the newborn

With a lack of oxygen, respiratory and metabolic acidosis develops, characterized by azotemia, hypoglycemia, hyperkalemia (then hypokalemia). With an imbalance of electrolytes, cellular hyperhydration increases.

Acute asphyxia of newborns is characterized by an increase in the volume of circulating blood due to red blood cells; asphyxia occurring against the background of chronic hypoxia – hypovolemia. This leads to blood thickening, increasing its viscosity, and increased aggregation of platelets and red blood cells. With such microcirculatory shifts, the newborn suffers from the brain, kidneys, heart, adrenal glands, liver, in the tissues of which edema, ischemia, hemorrhages, hypoxia develop. As a result, there are violations of Central and peripheral hemodynamics, the impact and minute volume of discharge decreases, and blood PRESSURE drops.

Clinic of Asphyxia of the newborn

The defining criteria for newborn asphyxia are respiratory disorders that lead to impaired hemodynamics, heart activity, muscle tone and reflexes.

According to the severity of manifestations in obstetrics and gynecology, there are 3 degrees of asphyxia of newborns with an assessment in points on a 10-point scale (method) Apgar within the first minute after birth: 6-7 points – light asphyxia, 4-5 points-medium and 1-3 points – severe asphyxia . An Apgar score of 0 points is considered clinical death. The criteria for assessing the severity of asphyxia of newborns are heartbeat, breathing, skin color,muscle tone and reflex excitability (heel reflex).

With a slight degree of asphyxia, the newborn takes the first breath in the first minute after birth, the child listens to weakened breathing, acrocyanosis, cyanosis of the nasolabial region, reduced muscle tone is detected.

Asphyxia of a newborn of moderate severity is characterized by inhalation in the first minute, weakened regular or irregular breathing, weak cry, bradycardia, reduced muscle tone and reflexes, blueness of the skin of the face, feet and hands, pulsation of the umbilical cord.

Severe asphyxia of newborns corresponds to irregular breathing or apnea, absence of cry, rare heartbeat, areflexia, atony or marked hypotonia of the muscles, pale skin, lack of pulsation of the umbilical cord, the development of adrenal insufficiency.

In the first day of life, newborns with asphyxia may develop a posthypoxic syndrome, which is manifested by a lesion of the Central nervous system - a violation of cerebral circulation and liquorodynamics.

The diagnosis of Asphyxia of the newborn

Asphyxia is diagnosed in the first minute of a newborn's life, taking into account the presence, frequency and adequacy of breathing, heart rate, muscle tone, reflex excitability, skin color. In addition to external examination and assessment of the severity of the newborn's condition on the Apgar scale, the diagnosis of asphyxia is confirmed by the study of the acid-base state of the blood.

Methods of neurological examination and cerebral ultrasound (ultrasonography) is aimed at differentiation of hypoxic and traumatic CNS injuries (extensive subdural, subarachnoid, intraventricular hemorrhages, etc.). For newborns with hypoxic lesions of the CNS characterized by the absence of focal symptoms and increased neuro-reflex excitability (in severe asphyxia – CNS depression).

Treatment of Asphyxia of the newborn

In case of asphyxia of a newborn of light and medium severity, the contents are aspirated from the nasopharynx, mouth and stomach; auxiliary ventilation of the lungs by masking; introduction of 20% glucose and cocarboxylase solution by weight into the umbilical vein. If during asphyxia of a newborn of moderate severity, spontaneous respiration has not been restored after the measures taken, the trachea is intubated, the contents are aspirated from the respiratory tract,and the ventilator is adjusted. Additionally, a solution of sodium bicarbonate is administered intravenously.

Resuscitation of premature newborns with asphyxia differs slightly from the scheme of resuscitation in full-term children.

In the future, newborns who have suffered asphyxia require intensive monitoring and therapy: oxygen support, craniocerebral hypothermia, infusion of solutions, vitamins, and symptomatic treatment. Newborns with mild asphyxia are placed in an oxygen tent; with medium - and heavy – in the incubator. The question of feeding and its methods is decided based on the condition of the newborn.

After discharge from the hospital, a child who has suffered asphyxia needs to be monitored by a neurologist.

The prognosis of Asphyxia of the newborn

The nearest and long-term prognosis is determined by the severity of asphyxia of the newborn, the completeness and timeliness of the medical aid.

To assess the prognosis of primary asphyxia, the newborn's condition is assessed using the Apgar scale 5 minutes after birth. With an increased estimate, the Outlook for life is considered favorable.

In the first year of life, children born in asphyxia often have Hyper - and hypovexitability syndromes, hypertension-hydrocephalus or convulsive perinatal encephalopathy, diencephalic (hypothalamic) disorders. Some children may die from the effects of asphyxia.

Prevention of Asphyxia of the newborn

Nowadays, obstetrics and gynecology pay great attention to the implementation of effective measures for the prevention of neonatal pathology, including asphyxia of newborns.

Measures to prevent the development of neonatal asphyxia include timely treatment of extragenital diseases in a pregnant woman, management of pregnancy taking into account existing risk factors, intrauterine monitoring of the placenta and fetus (dopplerography of the utero-placental blood flow, obstetric ultrasound).

Prevention should be done by the woman herself, giving up bad habits, observing a rational regime, following the instructions of an obstetrician-gynecologist.

Prevention of asphyxia of the newborn during childbirth requires the provision of competent obstetric care, prevention of fetal hypoxia in childbirth, and the release of the upper respiratory tract of the child immediately after birth.