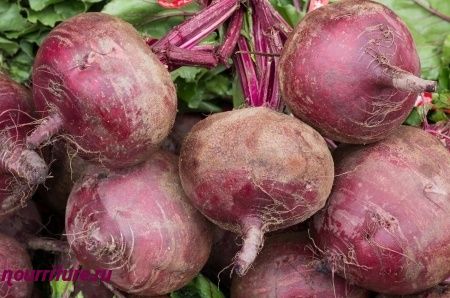 In the South-Western regions of Russia and Ukraine, the beets called beet or beetroot (also in Belarus – Belarus. beetroot). Beetroot is found on all continents except Antarctica.
This root crop has been known since ancient times. The first mention of beetroot dates back to the Mediterranean and Babylon – where beet leaves were used as food, and the root – as a medicine. Beetroot was highly valued by the ancient Persians, Arabs and Greeks, who sacrificed it to the God Apollo and made it an integral part of their diet. In Ancient Rome, both root vegetables and beet leaves soaked in wine were used for food. It is noteworthy that the Romans contributed to the spread of beets in Europe. In Russia, beetroot appeared in the X century, and presumably it was brought to us by the Byzantines.
It is known that long ago healers used beets for various ailments and prepared medicines from it. Even in the writings of Hippocrates, beetroot is often mentioned as a remedy for all sorts of diseases.
The culinary palette of dishes where beetroot is involved is also rich. So, from fresh beet leaves make salads and cook beetroot. And in the fall and in the winter its roots are boiled, stewed and stuffed.
Beets are widely used for cooking borscht, beetroot, salads and vinaigrettes. It is recommended to add young nettles, sorrel or quinoa to beetroot dishes, as they increase the vitamin value of food and improve its taste. In addition, beetroot is a valuable dietary product and is part of many dietary dishes.