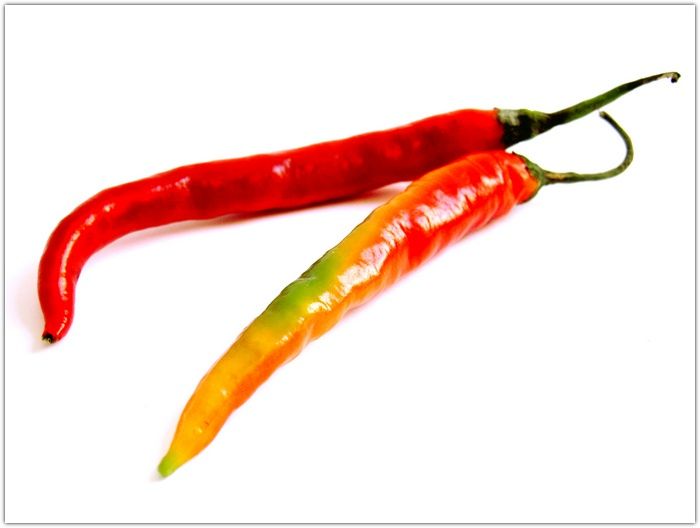 The birthplace of chili, or cayenne pepper, is considered tropical America. As evidenced by the finds in Peruvian burials, this pepper was cultivated here long before the discovery of America by Columbus. No wonder the Spaniards and Portuguese called it "Indian".
Currently, hot chili peppers are grown in most countries with a tropical climate: Thailand, India, Vietnam, Indonesia, Brazil, Colombia, Guiana. By the way, it is from the Guianan port city of Cayenne that the second name of the pepper – Cayenne-was formed.
Chili peppers are the smallest member of the capsicum family. There are a huge number of varieties of chili, all of them differ in flavor, size and degree of sharpness. In this case, the pods are red, green, yellow, orange and even black!
Depending on the variety, the taste of chili can be quite tender or strongly burning (the main rule is that the smaller the pod, the more burning it is). The sharpness of the chili depends on the amount of capsaicin-the oil contained in the seeds and pulp of the pod. This oil can burn the skin and eyes, so when using chili, it is better to wear rubber gloves and cut out the middle of the pepper along with the seeds.
As a spice, cayenne pepper is used both fresh and dried. Dry chili can be added to dishes in the form of a pod or powder, but more often a mixture of chili powder, oregano, cumin, garlic and salt is made.
Chili powder is made from the varieties of Chile cultivated in the East. The pods used for the powder are often baked first, which gives them more flavor.
Chili powder is added to soups, especially tomato and fish soups, goulash, almost all types of sausages, fish dishes, sauces, beans, cabbage and rice. It is good to add ground red pepper to mashed potatoes in combination with garlic, coriander, basil, savory and bay leaf powder.
The raw chili pod is served with meat, bread, and various cheeses. It is often marinated, including with other vegetables. In addition, a few pieces of chili are added to borscht and meat soups (during cooking, and not in the finished dish).
Cayenne pepper is known to improve the taste of beef, pork, fish, and many entrees. Therefore, many lovers of spicy food use it as a spice in the manufacture of kebabs and gravies for meat.
Today, cayenne pepper is consumed in almost all countries of the world. In Japan, China, and India, they are flavored with chicken, pork, fish, and seafood. Almost every dish it is added Korean and the Hungarians cook with it a variety of paprikas.