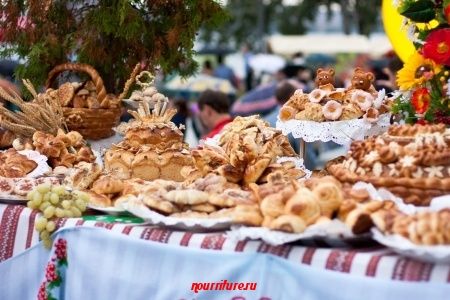 Ritual or festive food is first of all a form of social communication and only then-a way to meet the vital needs of people. Ceremonial dishes are an element of the culture of the people and represent a reflection of their historical, religious and mystical traditions.
In the cuisine of Eastern Ukraine, ceremonial food was traditionally divided into two categories: family and calendar. Family events-happy and sad-wedding, matchmaking, birth of a child, funeral-were always accompanied by the preparation of special dishes. For example, when a child was born, a young mother was given treats in the form of fruit, honey, uzvar , bread, eggs , butter, and sugar . At the same time, only women could visit the woman in labor, and they brought edible gifts. It is interesting that each such gift was not only a tribute to customs - it carried a sacred symbol denoting well-being, health, success, longevity and a happy life.
At the christening, they steamed "Baba" porridge - a dish of millet with eggs and butter, which was prepared by the midwife who delivered the baby. Porridge was brought in an earthen pot, and guests haggled for the right to break it. Usually the highest price was given by the godfather, who was supposed to hit the pot with a rolling pin so that the contents remained on the table. The mother was served a glass of Varenukha, and the guests took a piece of porridge and wished the young mother and child health. Families where there was no kids, he picked up a shard of a broken pot, hoping to get offspring.
Ukrainians have always believed that grain, cereals, flour or bread brought to a funeral have magic power. Previously, these products were given to the house where there is a dead person, and they were held a ceremony of farewell to the deceased.
In different regions of Ukraine, ceremonial bread has different names. For example, at the poles it is called Vert, and in the Poltava region and in southern Ukraine – diving.
In the Eastern regions of the country, cookies shaped like larks are baked on the day of the forty saints. Usually the hostess bakes 40 rolls and treats them to children – her own and others'.
On winter Andrew – a holiday in mid – December-prepare Kalita, which is otherwise called malamay. Kalita is a ritual bread in the form of a roll, which is tied on a string to the ceiling so that the young man in the jump could bite off a piece of baking. If a young man managed to bite off a Kalita on the fly, he is accepted into the company of "adults", he can go on dates with a girl, do men's work around the house, get a bride and get married.
Another ritual dish is a variation of the Kuti – koliva – prepare for the Wake. Kolyva is a whole uncrushed barley grain is boiled and drizzled with honey or sugar syrup. This ritual dish is an integral part of the memorial dinner, which is arranged after the funeral on the 9th and 40th day.
On the territory of Eastern Ukraine, it is still customary to bake a large loaf for a wedding, bless the newlyweds with homemade bread, and go to matchmakers "for the bride" with their pastries. In addition to the loaf, cones are baked for the wedding - ritual cakes in the form of rolls, small buns or birds. They are distributed to guests at the wedding and they also thank the witnesses.