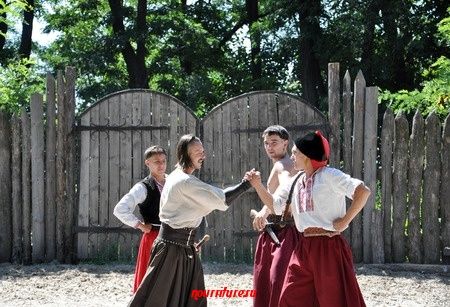 Zaporozhye region, among other regions, is part of Eastern Ukraine. And it was here, beyond the Dnieper rapids, that the very same Freeman-the Zaporozhye Sich – once was. What does history tell us about the gastronomic preferences of the Cossacks?
It is known that the Zaporozhye Cossacks were not gourmets, they were unpretentious in food, so there was a popular saying about their simple attitude to food. They said that a Cossack is like a small child: if you give a lot, he will eat everything, if you give a little, he will be happy. At home, in a rare time of peace, the table of the Cossacks did not differ from the food of an ordinary peasant. The main task of cooks was to prepare delicious and nutritious food. Were held in high esteem porridge, seasoned with bacon and onions, dumplings made of wheat flour, Salamat, Kulish and lard in all types.
Meat was cooked on holidays. Mostly it was pork, because such a wide distribution of pork meat was, oddly enough, a historical necessity. Using oxen as a draft force, the Ukrainians could not use the "tool of production" for food, and during the invasion of the Mongol-Tatars, who did not eat pork and therefore did not take pigs from the local population, people were able to survive thanks to the pig. By the way, the people did not forget the services rendered to Ukrainian domestic artiodactyls, and put a monument to the pig.
In Ivan Kotlyarevsky's Aeneid there is a description of a Cossack dinner:
Laid in a row of pine boards,
On them - pots and bowls platoon;
And all without saying a word,
Potabivali porridge mouth.
They swallowed lard and dumplings,
And Salamat, and pampushki,
Then they leaned on Braga;
Gorilka was whipped up and down,
They got up from the table
And they went to sleep together.
As you can see, the everyday food of an ordinary Cossack was simple and unpretentious. But the diet of the Cossacks in the campaign was different from their gastronomic preferences in peacetime. The most popular product during the war was fish. It was consumed in all types: boiled, fried, salted, smoked, baked. At the same time, the variety of fish for the ordinary Cossack differed from the variety for the gentry and elders. Ordinary mortals ate Dnieper pike, catfish, roach, bream, tench, but the "higher caste" ate eel, sturgeon, trout.
During long hikes, only highly salted dried fish could be preserved. It was used for preparing first courses, stews, and adding it to porridge. Fish broth was used to prepare Sherba, a dish with a consistency similar to jelly, with brewed flour. Ear often eat with grouse – millet porridge with sour rye dough. Boiled fish was watered with the broth in which it was prepared, with the addition of garlic and salt. This spice had its own name – salamuri.
The Cossacks were experts in fish farming and claimed that its different varieties correspond to the nutritional value and taste of different types of meat. Instead of beef, they ate carp, and about catfish they said: "what is somina, what is pork."
Despite a rather hard life, the Zaporozhye Cossacks knew a lot about feasts, and on holidays their tables were full of viands:
Everyone drank again, ate again,
You'll find such eaters, -
Yes all from maple plates,
From light pouring pots:
A pig's head with horseradish,
Then noodles for a change,
They also killed the Turkey,
For salamata ate porridge,
There poetry, and teeth, and Kvasha,
They ate poppy-seed cake.
And drinking cups the slyv'yanka,
Honey, beer, Braga, whatever you could,
And just vodka, and calanco,
For the spirit of juniper burned.
(From The Aeneid By I. Kotlyarevsky)