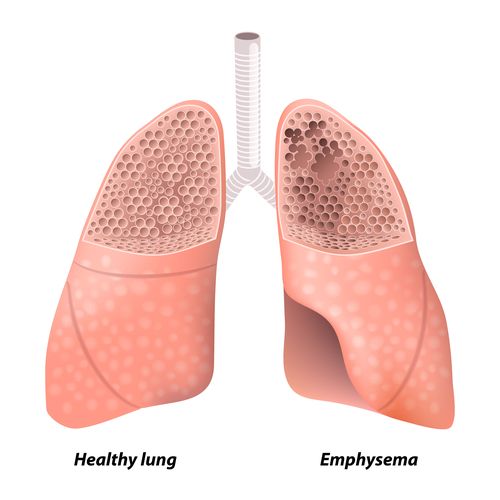 - chronic progressive disease characterized by pathological expansion of air spaces distal to the terminal bronchioles with the destruction of alveolar partitions.
Distinguish emphysema panacinar (uniform defeat of all of the alveoli, forming part of the acinar lung) and centriacinar (with the destruction of respiratory bronchioles, alveolar passages and alveoli in the center of the acinus and the preservation of the surrounding alveoli).
Bullous emphysema is diagnosed if the emphysematous section of the lung is larger than 1 cm.
Together with chronic obstructive bronchitis and bronchial asthma, emphysema of the lungs is part of the group of chronic obstructive lung diseases.
Chronic bronchitis and emphysema of the lungs usually occur simultaneously (they are caused by the same factors), but the manifestations of one of these diseases can dominate the clinical picture.

Etiology, pathogenesis . Destruction of the alveolar wall occurs under the influence of proteolytic enzymes of white blood cells involved in the inflammatory process; normally, this process is prevented by the anti-proteolytic system. 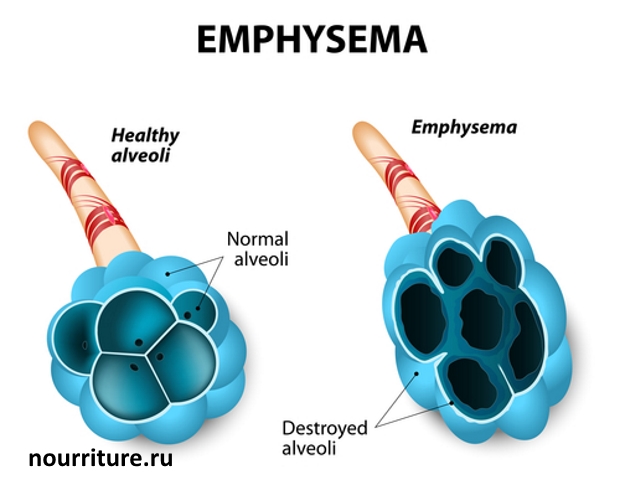 A role in the development of emphysema is a balance between exposure to oxidants and activity of antioxidant system.
The main risk factors for emphysema that disrupt the balance of these systems are congenital deficiency of the main protease inhibitor o-antitrypsin, tobacco smoke inhalation, air pollution with sulfur dioxides, nitrogen, occupational hazards (dust containing cadmium and silicon), repeated respiratory infections.
The weakening of the elastic properties of the lung leads to the fact that during exhalation and thus increase intrathoracic pressure small bronchi that do not have their cartilaginous skeleton and devoid of elastic traction of the lung, passively collapse, thereby increasing bronchial resistance on the exhale and increase in pressure in the alveoli – expiratory collapse underlies irreversible bronchial obstruction in the development of emphysema. Ventilation and perfusion disorders (perfusion of poorly ventilated areas, ventilation of non-perfused areas of the lung) create conditions for the occurrence of pulmonary hypertension; chronic hypoxia contributes to the development of compensatory erythrocytosis.

Symptoms, course.Characterized by shortness of breath on exertion, a symptom of "pant" (exhale through the folded tube lips, with swelling of the cheeks allows to overcome premature expiratory bronchial collapse), the weight loss, barrel chest, decrease its respiratory excursions, expansion of intercostal spaces, bulging supraclavicular regions, boxed percussion sound, impaired breathing, reducing the area of relative dullness of heart, voiceless heart tones.
The x-ray shows a low standing of the diaphragm and a decrease in its mobility, as well as an increase in the transparency of the pulmonary fields.
In the study of pulmonary function tests reveal an increase in total lung capacity and residual volume, reduced vital capacity, expiratory volume, elastic properties of the lung.
Test with inhalation of bronchodilator (salbutamol, ipratropium bromide, etc.) allows to evaluate the reversibility of bronchial obstruction.
In the terminal stage of the disease, signs of a chronic pulmonary heart appear; with severe respiratory failure, red blood cells and an increase in hemoglobin are detected in the blood test.
Treatment is symptomatic: respiratory exercises aimed at maximum inclusion of the diaphragm in the act of breathing; the exclusion of Smoking and other harmful effects, including professional ones; the use of mucolytics (acetylcysteine), bronchodilators (prolonged theophylline, inhaled beta-adrenomimetics and cholinoblockers) according to indications. Joining a bronchopulmonary infection requires the appointment of antibiotics.