Features of the German national cuisine: the history of the "spaetzle"(part two) 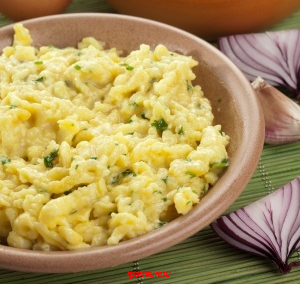 Previously, spatzle was rubbed by hand, and then, from the beginning of the 20th century, for reasons of labor economy, there was a machine production of spatzle, which produced products similar to Handicrafts. After all, in fact, it is the hand spatzle that is still considered the most delicious!
With the advent of industrialization and improved welfare of Swabians, spaetzle turned from an ordinary everyday meal into a culinary delicacy served at the festive table.
Thus, in the Chronicles of 1937, spaetzle already appears as a holiday food. A year earlier, the Swabian poet Sebastian Blau declared them a regional symbol of Swabia, saying: "Spaetzle is the Foundation of our cuisine, the glory of our land, the alpha and omega of the Swabian menu…»
The great importance of spaetzle in Swabian cuisine is also evidenced by the novel "the Story of the seventh swab" published in 1827, according to which in Swabia there is a custom "to eat five times a day, namely, five times a day soup, and two more times - knepfle or spaetzle". In turn, the writer Elise Henle in 1892 explained that every shvabke is supposed to own the art of cooking spatzle. "It's not a true MOP if it doesn't know how to cook a spatzle," Genle said.
Today in Swabia, spaetzle and knepfle are present in the assortment of almost all manufacturers of flour products and grocery stores. In addition, since the eighties of the last century, they have been successfully exported abroad.
There are many ways to prepare spatzle. For example, in his cookbook "Swabian spatzle" Siegfried Ruoss lists more than 50 relevant recipes.