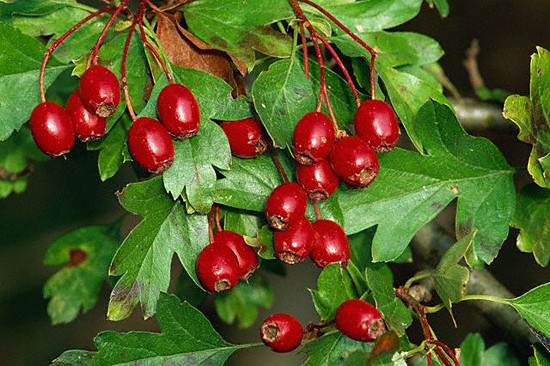 The birthplace of hawthorn is considered to be Western Europe. The Latin name of this plant comes from the Greek word "krataios", which means"strong". Most likely, the hawthorn was so dubbed because of its strong wood, hard thorns, longevity (lives up to 400 years) and unpretentiousness to weather conditions.

The use of hawthorn for medical purposes has been known since the time of Dioscorides (I century AD). Then hawthorn was used to treat heart diseases, insomnia, dizziness and shortness of breath.

In Chinese folk medicine, hawthorn fruit has been used for several centuries to enhance digestion for intestinal diseases, and in combination with wine – for heart diseases. In addition, hawthorn has been prescribed with great success for various neurotic disorders.
The scientific justification for the use of hawthorn preparations was given by English scientists at the end of the XIX century. They noted that hawthorn has a positive effect on heart disease, increases heart contractions and has an overall calming effect.

To date, there are about 40 species of wild hawthorn in Russia, but only three species are suitable for medicinal purposes – blood-red hawthorn, five-petalled hawthorn and prickly hawthorn. These species differ in the shape of the leaves and the degree of their pubescence; the size and color of the fruits; the number of seeds; the color of the branches. All of them are shrubs or small trees up to 4-5 m high.
Especially famous for its medicinal properties is the blood-red hawthorn, which grows in sparse forests, edges, ravines, riverbanks and the outskirts of the steppe zone. It is found in the east of the European part of Russia, in the south of Western and Eastern Siberia. It is often cultivated as an ornamental plant. This hawthorn has strong purple-brown shiny shoots, usually bearing thick straight spines at the nodes, the length of which reaches 4 cm. Its fruits are blood-red, less often brownish, almost spherical, with a sweet and sour taste. It blooms in May-June, while its fruits ripen in August-September.
Thorny hawthorn is not found in the wild in Russia, but it is cultivated in the middle and southern strip.

As for the five-petalled hawthorn, it differs from other species in its black round fruits with a bluish coating, as well as less developed flesh. It grows mainly in the Caucasus.
Hawthorn fruits are used not only in medicine, but also in cooking, and in the alcoholic beverage industry. They are used to make jam, jelly, jam, sauce, compote, mors and more.