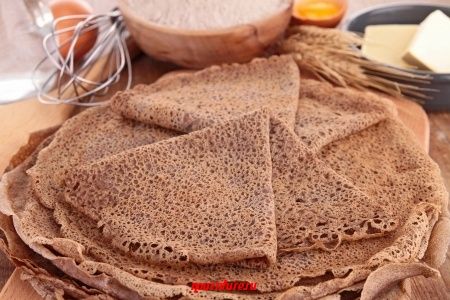 In modern Ukrainian cuisine, many dishes have been preserved, the names of which very accurately reflect either the recipe of the food, or the shape of the product, or the technology of its preparation.
For example, in the Eastern regions, they still prepare a very delicious dish – peas. To prepare it, the peas are boiled to a porridge-like state, cooled and mixed with rye flour. The mass is spread on a hot pan in small cakes and fried in lard or sunflower oil (during lent). Peas before serving pour sour cream, crushed garlic and oil.
Buckwheat flour is used to bake buckwheat pancakes with a perfectly balanced taste and useful properties. Buckwheat is prepared on whey, during lent – without eggs, with the addition of rye or wheat flour. As a baking powder, use soda (sometimes yeast). Buckwheat pancakes are lush, beautiful and delicious. And with sour cream-they are simply delicious!
As a dessert with tea prepared verhuny (otherwise they are called kindling for the fragility of the finished products). Fresh dough is prepared in the whey or buttermilk, and cut into thin strips, fry in deep fat. The finished pastry looks airy, tender and fragile. It is sprinkled with powdered sugar and served for dessert.
Of meat (most often pork) delicious and nutritious dish – Duchenne. Small pieces of meat are rolled in wheat flour, add vegetables (onions , carrots) and pour sour cream or broth, stew until ready in pots. Duchenne served with boiled potatoes, and sometimes cooked together with it.
Grout is another dish widely spread in Eastern Ukraine. The hard-boiled wheat dough mixed with eggs is ground until small balls appear, which are then cooked in a broth – meat or fish. Sometimes grout is cooked in milk and served with sugar or jam for dessert.