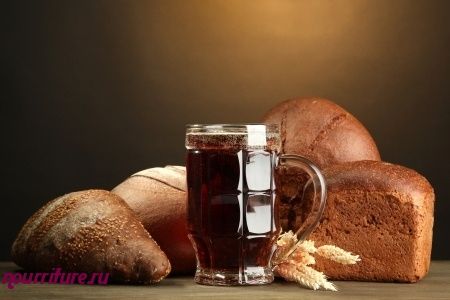 How I want to pour ice-cold kvass into a large mug in the summer heat and see how slowly its surface "fogs up" and is covered with the smallest droplets of evaporation.
Refreshing, spicy, vigorous, invigorating and instantly reviving drink has such a long history that if everyone knew about it, they would undoubtedly treat kvass with even greater respect.
And how not to read the drink, which was described by Herodotus, recommended by Hippocrates and sung in his works by Pliny the Elder!
The vital nectar-fruit kvass-was prepared in Babylon, it was known in Ancient Mesopotamia and Egypt, and, of course, it was prepared and consumed long before the official date of the formation of Kievan Rus. Written sources have been preserved, in which the author, telling about the baptism of Russia, says that in honor of the holiday, Prince Vladimir Svyatoslavovich ordered to treat the people with "food, honey and kvass". In the" Tale of Bygone Years", the chronicler Nestor claims that Andrew the First-Called, the holy apostle, saw how the Slavs were doused with kvass in Russian baths.
There is a mention of the traditional drink in the works of the famous historian Kostomarov, where he lists the types of kvass and says that this product was revered both in peasant families and in the well-to-do. What can I say, Anna Ioannovna herself, the Russian tsarina, introduced the post of kvasnik – a person who served a drunken and invigorating drink to the empress. And it was none other than M. A. Golitsyn, the most serene prince, who was demoted to buffoonery, who was appointed to this position. They called him Kvasnik.
In his notes on Russian kvass, Giacomo Casanova, a world-famous seducer, recalls with delight that the taste of the drink "surpasses Constantinople sherbet", and at the same time it is so cheap that one ruble can buy a whole barrel.
Dmitry Ivanovich Mendeleev himself promoted kvass for medicinal purposes, and the medic knew a lot about healthy drinks! More than 100 years ago, the Russian scientist V. Sotnikov experimentally proved the useful properties of kvass, in which even the pathogens of typhus died. And our contemporary Boris Bolotov became famous for his work in the development of kvass recipes based on medicinal herbs.
The useful properties of the life-giving drink are reflected in folk art: sayings, proverbs. Pushkin and Dostoevsky wrote about kvass, many original dishes are prepared on its basis, and even the popular expression "kvass patriotism", although it has a negative connotation, still owes its appearance to a popular drink.
By the end of the XV century in Russia there were more than half a thousand varieties of kvass! But the most popular drink was made from rye flour and malt - it was called "Russian kvass". In addition, Brovarsky kvass made from molasses and barley malt, white sugar kvass made from wheat malt and rye crackers, and "sour soup" - a drink made from barley and rye malt with the addition of wheat flour were known.
In addition to these ingredients, kvass was prepared from fruits, berries, dried fruits, birch juice, rhubarb. Honey, raisins, wax, beets, herbs, lemon, and even seaweed were added to it!
On the basis of kvass, many recipes of dishes have been developed, both in Russian and in other cuisines of the peoples of the world: okroshka, botvinya, putra, tyurya, chorba, zama. These dishes are especially good in the summer heat; their ancient origin and popularity in modern gastronomic traditions indicates that the interest in kvass has already survived the centuries, and it seems that it is not going to fade.