Life on the planet Mars will soon be found 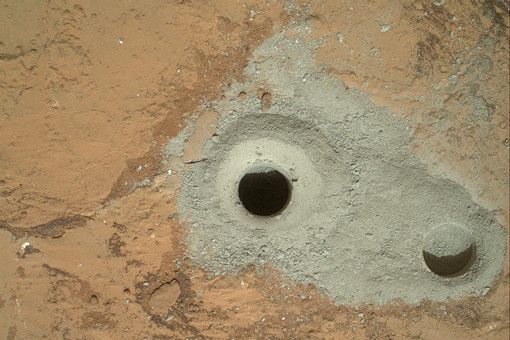 The Curiosity Rover took images of the first man-made hole in rock on the surface of the planet Mars, taking samples of it. In the future, NASA plans to send Curiosity to analyze these materials and make a new journey on the surface of the red planet.
As you can see in the photo, the "hole" itself is not very large — a diameter of 1.6 cm, and a depth of 6.4 cm-the size is slightly larger than those that are drilled into the walls of apartments to hang a picture or bookshelf, but this is the first man-made hole that appeared on Mars. Research scientist John Grunsfeld, NASA's Deputy Director of science, called the hole the most important achievement of the Curiosity Rover team since its landmark landing on the surface of the red planet last August 2012.
The team operating the Rover was preparing for drilling on Mars back on our planet. Eight different drills were tested on the Ground and more than 1,200 holes were drilled in twenty types of rock. And on Mars itself, this operation was prepared for more than one month.
First, the team of scientists chose a place to drill on the surface of the planet - a small depression in the Gale crater, called Yellowknife Bay. The rocks of the depression are different from those on which Curiosity sat and which surround it. The surface of the rock of the depression is speckled with pale veins that may contain calcium sulfate, and the stones themselves inside the depression contain the smallest grains of sedimentary rock.
In just a 650-meter journey, the Curiosity Rover found more than one evidence that there was water on the ancient palnet Mars.
But up to this point, these were superficial observations, and the analysis was mostly dust. By drilling into the rock, even if only six centimeters, scientists will gain knowledge about the" wet " history of Mars.
After completing the work in this Bay of the Yellow Knife on the surface of the planet, the Curiosity Rover will go further to its final destination — the foot of the five — kilometer mountain Mount Sharp-for more than one month.