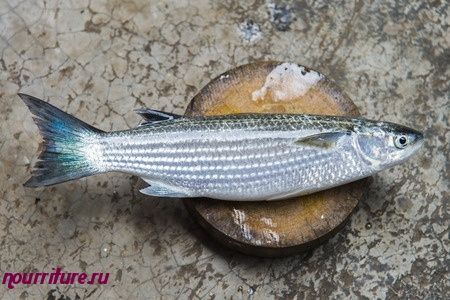 Scows full of mullets,
In Odessa, Kostya brought... (from the song by M. Bernes)
Mullet is a marine, mainly herbivorous fish belonging to the order mullet-like. It is found off the coasts of the United States, New Zealand, Australia, Madagascar, Russia (the Black, Caspian and Azov seas), Ukraine and Southeast Asia.
In the Black and Azov seas there are 4 species of mullet: singil (serendaka, sarianak), ostronos (chularka, larisch), Loban (black mullet) (in the first third of the twentieth century, this fish was artificially populated also in the Caspian sea, where it successfully took root), pelengas (also spelled "pilengas", otherwise called belingas or menada-a tychoakean type of mullet that comes to the Black sea from Japan and is inhabited in the the sea of Azov in the 60s of the last century). In addition to the listed species in the Black sea, there are still Golovach mullet (Ramada, Magnit mullet) and guban mullet, or thick-lipped mullet.
Despite the fact that the appearance of mullets is not fundamentally different from each other – they all have a torpedo – shaped body, large scales and flattened head-nevertheless, it is safe to say that the average body weight and fat content of each type of mullet is different, and therefore different methods of cooking are applied to them.

The biggest fish among the mullet is a pelengas. Its body length can be more than 1 m, and its weight can range from 2 to 10 kg! (However, most often pelengas weigh 5-6 kg.) Next comes the Loban, growing to 55-75 cm in length and weighing about 2.5-3.5 kg, then the mullet-Golovach with a body size of 60 cm and a weight of 2.9 kg, then the mullet-guban-75 cm in length at a weight of 4-5 kg, the singil-35 cm in length at 1 kg of live weight, and finally the sharpnose-25 cm in length at a weight of 0.5 kg.
The largest mullet – pelengas-is usually stuffed and baked. Lobana can also be baked, for example, in sour cream, but no longer stuffed. In addition, it is important to keep in mind that Loban sometimes contains poison in the head, so before heat treatment, the head must be cut off!
Other mullets are suitable for stewing, baking, cooking (ordinary, steam, on the fire), pripuskaniya, drying, Smoking, frying and salting. In the food industry, all mullets are made into canned food.
It should be noted that in General mullets have an amazing taste. This characteristic is especially applicable to black sea and Azov mullets caught in autumn and spring. Separately, we should consider Loban, which gives very tasty caviar and has a kind of delicious "fat"in the abdominal cavity.
Caspian mullet has less fat meat than its "counterparts" from other seas. However, it is also in high demand among fish lovers.
Mullet meat is white and tender. It does not contain small bones, and therefore it is easy to eat. Whether baked, toasted or cooked, it goes well with pasta, boiled rice, potatoes, onions and leeks. As spices, it is suitable for fennel, celery, black pepper, mustard and garlic. Some also serve mullet in a sweet and sour sauce made from citrus fruits.