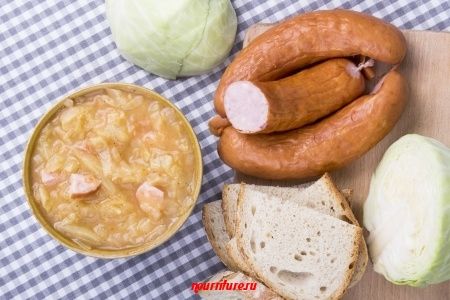 What is not prepared in Poland from white cabbage ! It is especially loved by poles, when it is cloudy and cold outside and fresh, non-greenhouse, vegetables in markets and stores are becoming less and less.
Cabbage salad is served with meat dishes as a side dish. In addition, cabbage is often used to make fillings for dumplings, which are called "pies"in Poland. Cabbage can be fresh, sour, fried or boiled.
If we talk about Polish second dishes, which include white cabbage, then golabki (in Russian, "cabbage rolls") comes to mind first. Traditionally, the top layer of golabki is formed from cabbage leaves, and the inner layer consists of meat, rice, or both.
There are also a number of Polish soups and first courses, where the main ingredient is white cabbage.
For example, a very tasty and healthy soup (contains a lot of vitamin C) – cabbage (kapusnyak) - is cooked from sauerkraut. Actually, it is an analog of Russian cabbage soup . The only difference is that the poles, as a rule, saturate it with a large amount of fat, so it turns out to be very high in calories!