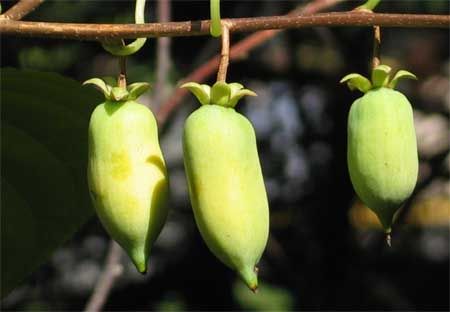 The honey-bearing liana Actinidia polygamum flowers are large, with white petals, during flowering they exude a delicate aroma. The fruits of polygamous actinidia ripen in late August-early September – in a shorter time than in other types of actinidia. At the same time, they do not crumble and can even remain hanging on the vine until the first frost, which greatly facilitates their collection.

I must say that during the ripening period, the fruits of actinidia polygamum change dramatically: from hard, light green, they turn into soft, orange. In shape, color and taste, they resemble small peppers. In the Far East, this type of actinidia is even called pepper, because the taste of the berries is burning!
There are several varieties of polygamous actinidia: "yellow spindle", "light", "pepper", "start", "apricot", "golden disk", "beauty", "lyubasha".
Berries of these varieties, eaten raw, quench your thirst well. They are also often eaten dried (dried). And some people make them into compotes, jelly, or make a delicious filling for pies.