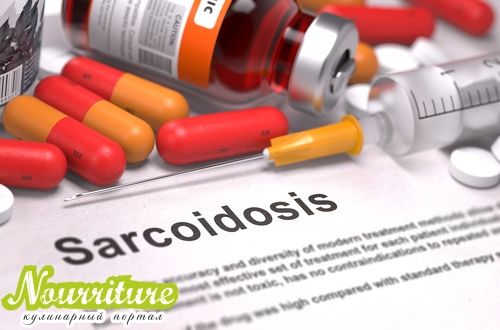 - a systemic disease of unclear etiology, characterized by the formation of granulomas in the tissues, consisting of epithelioid cells and single giant Pirogov-Langhans cells or a type of foreign bodies. Granulomas are of the same type, rounded ("stamped"), clearly separated from the surrounding tissue. Unlike tuberculous tubercles, they do not have caseous necrosis.
Sarcoidosis occurs mainly in young and middle age, somewhat more often in women. Almost all organs are affected, mainly the lymph nodes, lungs, liver, spleen, less often kidneys, skin, eyes, bones, etc. Most often, there is a lesion of the respiratory organs. 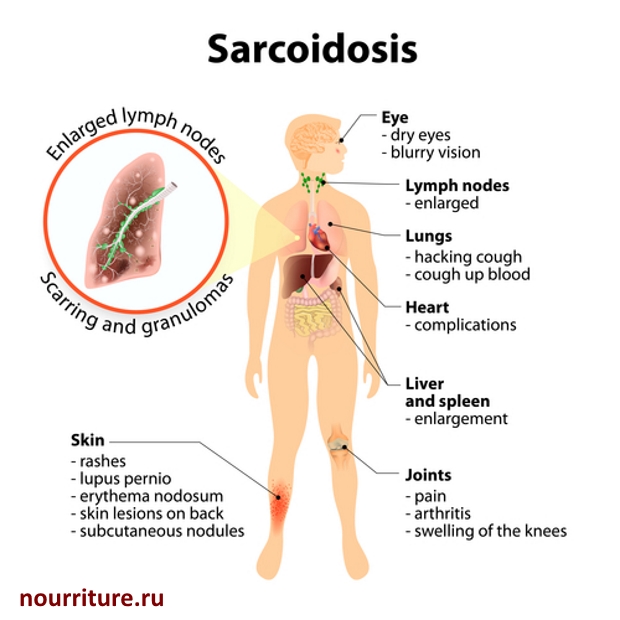 Symptoms, course. Stage I is characterized by an increase in intra-thoracic lymph nodes. At stage II, along with this, pronounced interstitial changes and foci of various sizes are determined, mainly in the middle and lower parts of the lungs. In stage III, significant diffuse fibrosis in the lungs and large, usually drain foci are detected, as well as pronounced emphysema, often with bullous-dystrophic and bronchoectatic cavities and pleural seals.
Approximately 1/3 of patients in stages I and II have no noticeable subjective disorders and the disease is detected by x-ray fluorography.
The course is subacute or chronic, often undulating; weakness, subfebrility, chest pain, dry cough, decreased appetite are noted. Wheezing in the lungs is rarely listened to and in small quantities.
Sometimes sarcoidosis begins acutely with a high temperature, swelling of the joints of the limbs, the appearance of nodular erythema, mainly on the skin of the shins, and an increase in external lymph nodes. In the blood-a tendency to lymphopenia and monocytosis, less often eosinophilia; ESR within the normal range or slightly increased. A characteristic feature is a decrease in General and local sensitivity to tuberculin, which is why the Mantoux test is usually negative. A positive Kveim reaction: the homogenate tissue lymph node is injected subcutaneously in a month at the injection site are formed sarcoid granulomas (currently, the test is rarely used). 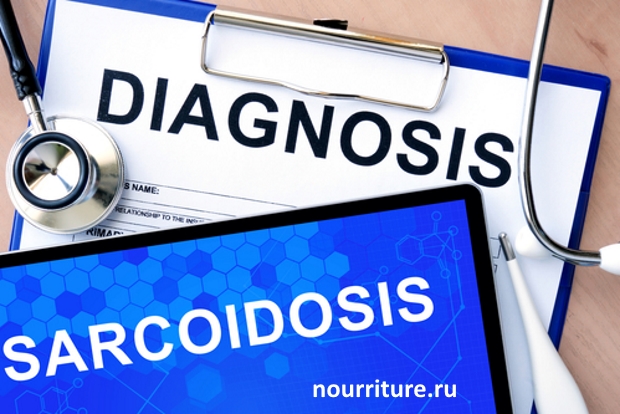 At stage III of the disease, these signs are more pronounced, and dyspnea and cyanosis gradually increase.
The duration of the disease is from several months to many years. In addition to the clinicorentgenological picture, the diagnosis is confirmed by the results of histological or cytological examination of the lymph nodes, skin, bronchial mucosa and lung tissue, where elements of sarcoid granuloma are detected. This way it is possible to differentiate sarcoidosis from tuberculosis, various lung disorders and other diseases.
Treatment is non-specific, primarily using glucocorticoids. Given the possibility of spontaneous recovery, glucocorticoids are usually prescribed after 3-5 months of observation, if the process does not tend to spontaneous involution.
Hormone therapy is indicated for acute onset of the disease with polyarthritis, nodular erythema, obvious progression with respiratory disorders, generalization of the process, with lesions of the eyes, kidneys, skin, cardiovascular and nervous systems. Usually prescribe prednisone at 30-40 mg per day, therapy in gradually decreasing doses is continued for 6-8 months, sometimes longer. If it is impossible to apply hormone therapy or if it is not effective enough, use hingamine (delagil) 0.25 g 1-2 times a day, vitamin E 300 mg/day. They also use diet therapy, physiotherapy (EHF therapy), plasmapheresis.

The prognosis is overwhelmingly favorable. At stage III, as a result of slowly increasing pulmonary heart failure, a fatal outcome is possible.