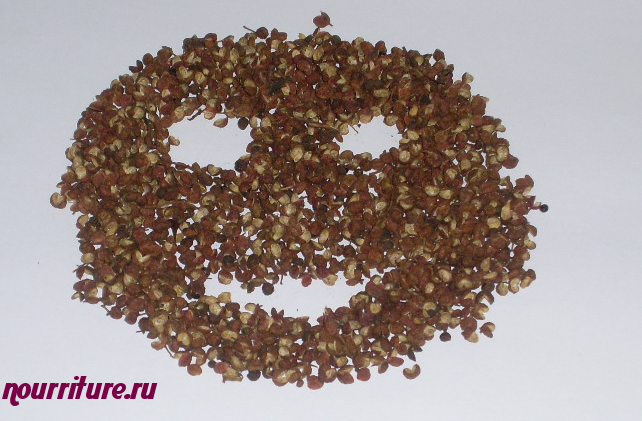 Sichuan pepper is the dried shells of the mature fruit of some species of" tooth tree " that grows in Northern China, Korea, Japan, and Mongolia.
The finished spice implies small fruit capsules, most often half-opened into two leaves, from which a dark, almost black egg-shaped seed with a diameter of 2-2. 5 millimeters falls out. The skin of Sichuan pepper seeds is much more valuable than the seeds themselves. The color of this skin is light brown on the outside and yellowish on the inside, and the outer surface is pimply.
Sichuan pepper has an extremely subtle and at the same time strong characteristic smell, which seems to have a citrus aroma, which makes it completely different from Jamaican pepper (read the article "Allspice (Jamaican)").
Sichuan pepper is popular in Korea, Japan, China, and the Pacific Coast of the United States. For example, in Chinese cuisine (especially in the provinces of Shaanxi and Sichuan), Japan, Tibet and the Indian state of Gujarat, it is used in fish, seafood, pork, poultry, as well as in confectionery. In addition, from ground Sichuan pepper, the Chinese prepare a popular seasoning "huajie", for which it is sifted and mixed with salt. In Japan, the leaves of the "tooth tree"are also used for food. Together with Sichuan pepper, they are added to the spicy mixture "shichimi togarashi", which also includes: white sesame seed, dried seaweed ("nori"), tangerine zest, hemp seeds, poppy seeds. From the leaves of the "tooth tree", the Japanese prepare two popular seasonings. From dried and ground leaves — a slightly burning seasoning "sanse", which gives piquancy and flavor to soups and noodle dishes, and from pickled ones — a mixture of "kimone", which perfectly complements vegetable dishes.
The taste differences between Korean sancho pepper, that is, Korean Sichuan pepper, which is part of the "sancho" seasoning, and Japanese Sichuan pepper for the "sanse" seasoning are minimal. At the same time, it is believed that they have a lighter aroma than their Chinese counterpart – pepper for "huajie" (see above), the aroma of which is concentrated in the shell, and not inside the fruit, so it tastes more spicy than the Japanese and Korean versions.
In general, in the countries of the Far East (Korea, China, Mongolia) Sichuan pepper is widely used in sauces for fish and seafood, in meat and even sweet dishes, where it is combined with cinnamon and ginger. In Europe and America, Sichuan pepper is mainly flavored in dishes made from shellfish and crustaceans (trepangs, scallops, squid, holothurias, crabs, shrimps, lobsters); it is added to sauces for fish salads, as well as in green tea. Sometimes this pepper is mixed with salt and served with boiled eggs or cold veal.
Sichuan pepper is added to the dish for 5-7 minutes before it is ready. Bookmark norms: from 2 to 8 peas per serving. However, the skin is most often used, and not the seeds themselves, since it is in it that the aromatic substance is concentrated.