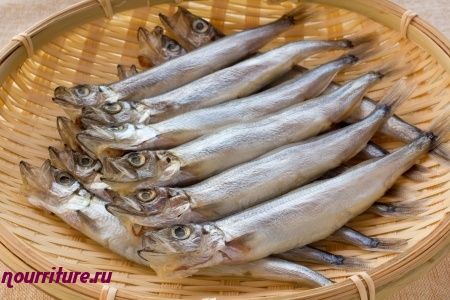 Smelt-a small predatory fish of the genus of salmon of the family smelt; has an elongated body, covered with easily falling beautiful scales: on the back-brownish-green, and on the sides-silver with a blue tint. The size of a smelt carcass on average is 10-18 cm, in rare cases it reaches 25-35 cm with a maximum weight of 350 g.
Smelt is found in many water bodies, both small and very large: in the North sea, various lakes (including Ladoga, Chudsky, Onega), the Baltic sea, the White sea, the Barents sea, the Pacific ocean, the Arctic ocean, the Atlantic, etc. Meanwhile, according to species, scientists distinguish toothed, or Asian, smelt, European smelt (the freshwater form of this species includes snetki), small-mouthed sea smelt and small-mouthed river smelt.

All freshly caught smelt produce a characteristic smell of fresh cucumbers, which disappears during Smoking. Smelt meat-tender, delicious, medium fat content (fat content ranges from 4.5-7.6%) - is often used in dietary and baby food.
Whole smelt carcasses are used for cooking fish fries, in addition, smelt stewed, rolled in breadcrumbs, flour or flour with spices (about 3-4 minutes on each side); pripuskayut, baked, cooked in batter, fried (in a pan or on a grill), marinated, smoked hot and canned in oil. Smelt is almost never used boiled and salted. Small smelt, as a rule, just fried, sprinkled with salt and served to the table with cold beer.
Some fish lovers believe that the taste of smelt meat is somewhat similar to salmon, others believe that, in fact, it is very similar to the meat of the Northern navaga. However, everyone agrees that smelt is extremely appetizing!
In addition to the meat itself, the smelt carcass sometimes contains caviar. Smelt caviar – yellowish, small, numerous, it is very pleasant to taste when fried.