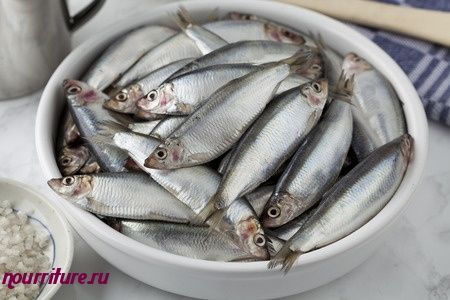 The sprat is characterized by a small size: its silver-colored carcass is only 10-15 cm in length and weighs about 50 g.
There are several versions of why the sprat is called a sprat, and not otherwise. According to the first version, it's all about the spiked scales located on the belly of the fish – they form a "keel", making the fish streamlined and little noticeable from below. According to the second version, the Russians borrowed the word "kilu" from the Estonian language, which was used to refer to this fish. Later, the name "sprat" was born from "kilu". The third version in common with the first. It says that for Estonians " kilu "was also not a native word, but they adopted it from the Germans, who used the word"Kiel" for its intended purpose.
The first mention of sprat dates back to the seventies of the seventeenth century. A Swedish diplomat named Gunn Ayrman, describing his trip to Muscovy (present-day Moscow), quoted the words of a famous Livonian song, where it is said that if the sprat is transferred to the sea, then the Swedes will face death. What does this indicate? Most likely, about the true love of the Swedish people for anchovies, or, in our opinion, for sprats. Indeed, it is no secret that people in Sweden enjoy eating anchovies, including at Christmas.
In Russia, the catch of sprat occurs between the end of April and the end of August, but it is believed that from may to September it has the best taste! A large amount of sprat is used for the production of fishmeal. The rest of the sprat comes to stores in salted, spicy-salted, pickled, fresh, dried, frozen, and smoked. But the most popular among fish lovers is sprat with spicy salt and smoked, that is, sprats in oil.
Sprat meat has an average fat content (approximately 7.6 g per 100 g of product). In its salty form, it is perfect for making pates, salads, sandwiches and other snacks. In addition, fresh sprat is often used to get cutlets, fillings for pies or (entirely) fish fries.

It remains to add that many peoples prepare interesting, unique dishes from sprat. So, in the Chuvash Republic, local residents love to make the soup with anchovies, which also traditionally added to the kvass, vegetables and sour cream. And in Novorossiysk, a popular treat is the so-called stew – a hot vegetable dish with sprat – also a very tasty and original dish!