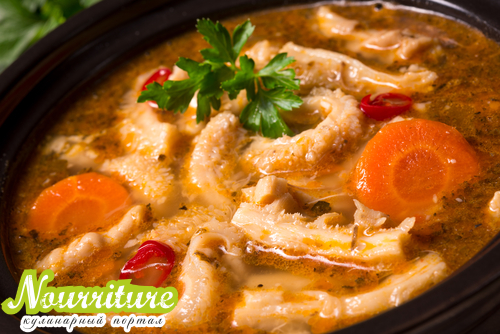 Tripe in the culinary business is called the anterior stomach of ruminants. Most often, this means the offal of a cow, but sometimes we can also talk about the rumen of a sheep. However, the concept of "tripe" is not limited exclusively to the anterior stomach, it also applies to the "grid", rennet, "book" and parts of the small intestine. And if in Germany, the tripe is understood mainly as the front stomach of the animal, then in France and Italy, other gastric divisions and the small intestine are processed and sold primarily. In English-speaking countries, due to its cellular structure, the "grid", also called "bee offal", has gained popularity.

When prepared for culinary processing, it has a white or ivory color and a soft, jelly-like structure, which nevertheless has elasticity. Tripe has a peculiar sweet smell, which remains even after heat treatment.

Tripe, as well as the rest of the animal's entrails, people have been eating since Antiquity. So, the origin of the Greek dish "kokoretsi" (lamb entrails with tripe, fried on a skewer), presumably, goes back to the era of sacrificial feasts, arranged at the altar of Zeus.

In the old days, it was really quite normal to eat the entrails of animals, among which there was a scar. People could not afford to neglect any part of the valuable carcass without eating it or using it in any way. It was only in the last century, when "noble" meat became available to most people, that the entrails went out of fashion, and the tripe gained a reputation as "food for the poor" or "peasant food". However, in the traditional national cuisine of many countries and regions, there are recipes with tripe, for example, "sour tripe" in Swabian cuisine, "tripe in Cayenne" in France," tripe in Florence "and" tripe in Milan "in Italy," tripe in Port "in Portugal," tripe in Madrid " in Spain.

By the way, in Portugal there is also a popular treat "dobrada", meaning a thick bean soup with tripe. Moreover, due to the frequent consumption of tripe, the Portuguese even received a nickname from other Europeans – "tripe eaters". Actually, there is nothing inexplicable in the preference of the Portuguese, because the valuable cow meat mostly fell before the Portuguese sailors, who needed to maintain strength during long-distance research trips on ships.

Variants of tripe soup are often among the national delicacies of other countries, for example, Bulgaria and Poland. Polish "flaks" became popular already in the 17th century, not only among the peasants, but also among the local nobility of the lower rank – the szlachta. However, the first recorded recipe for Polish tripe soup dates only to the beginning of the 20th century. Today, "flaki" is prepared in Lithuania, Ukraine and Belarus. However, there are quite a few gourmets who appreciate their taste.

In Southern Germany, Saxony and Switzerland, tripe can be found on the menu of many rural hotels. In Swabia, tripe is a traditional carnival treat.

But in Spain, Italy and France, tripe still occupies an important place in the culinary culture. It is added to stews, thick and thin soups, and is often fried and served as a main dish.

In France, there are several varieties of sausage "Andouille" and "Andouette", which include tripe.