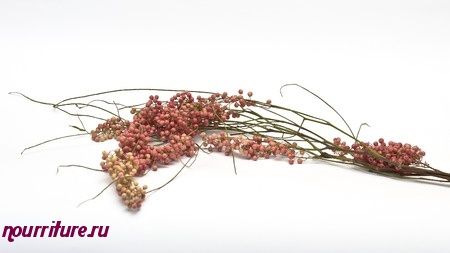 Dried fruits of the Peruvian pink pepper (soft shinus) are used as a spice. Often they can be found under the name pink pepper or red pepper. An infusion of them serves as a flavoring agent for drinks and syrups.
It is known that the ancient Incas used the outer part of the ripe fruit to make a drink. At the same time, the fruits were carefully cleaned to separate the outer part from the bitter inner part. Then the outer parts were mixed and held under pressure until all the juice was released from them. The resulting drink could be consumed immediately, brewed to produce syrup, added to corn porridge, or fermented into an alcoholic beverage.
In 1553, the book "Chronicle of Peru" by Cies de Leon gives the first description of the plant and its use: "Everywhere in the populated areas of this land, large and small trees are visible, which they call "molie". They have small leaves that smell of dill; the bark of this tree is so useful that if a person's legs are very sick and swollen, making a decoction of them in water and only washing them several times with this decoction, the pain and swelling disappear. For brushing your teeth, there are small useful twigs. From a very small fruit growing on this tree, the Indians make wine, drink, vinegar, or honey by dissolving the right amount of fruit with water in a vessel and putting it on the fire. After some of the liquid has evaporated, the remaining liquid, depending on the cooking method, turns into wine, vinegar or honey. The Indians have many such trees."
Peruvian pink pepper is not sharp, not burning. It does not fundamentally change the character of the dish. This pepper is great for salad dressings. To do this, the crushed peas should be mixed into the dressing and let it stand in the refrigerator for half an hour. Then the aroma of the spice will be revealed completely. A little more pink pepper can be added to the dressing in the form of peas.
Pink pepper can also be added to hot dishes. However, it should be remembered that it is combined only with fish, chicken, duck and veal. In addition, it is recommended to mix it in sauces.