Cereals (processing of cereals, what dishes can be prepared from cereals) 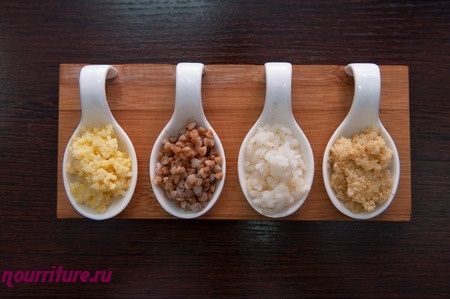 Processing of cereals consists of bulkheads or sieving and washing. For bulkheads, grits are poured on the table and, sorting, poured into a substituted container, leaving all foreign elements and impurities on the table.

Semolina, as well as any crushed sifted through a sieve. After the bulkhead, the grits are washed, with the exception of semolina, Hercules and buckwheat.
Buckwheat is washed only if it is heavily contaminated, but the appearance and consistency of the resulting dish significantly deteriorates.
Wash the grits with warm water. You should wash the millet especially carefully to remove the muchel from it, which gives the finished dishes a bitter taste. Cereals with a slight mustiness are thoroughly washed several times, rubbed with your hands, and then it is washed.
To make pearl barley boil faster, it can be soaked in cold water for 2-3 hours (for 1 kg of cereals, take 2-2. 5 liters of water).

What dishes can be prepared from cereals?

Semolina, oatmeal, pearl barley, millet, rice and barley cereals are used mainly for cooking porridge, chops and casseroles. In addition, semolina, pearl barley and rice cereals are also used as first courses.
Cereals and legumes should be washed immediately before heat treatment. After washing, the weight of cereals and legumes increases due to the presence of water on the surface of the grains, as well as due to the swelling of the grains.